Like everyone, we were looking forward to a couple of days at Yellowstone, but honestly, we thought that was all we needed, a couple of days, but to our surprise, we would have loved to have had at least a week. Yellowstone has so much to offer, whether it is riding the roads to see wildlife, hiking the many miles of trails, or visiting the museums and lodges, there is just so much to see and do. We personally would have liked to have had more time to hike. Seeing wildlife from the roads was amazing, but it would have been more spectacular to have walked up on wildlife, in their natural habitat, especially a big old grizzly. I know, everyone that I tell that to tells me “you wouldn’t say that if a grizzly got after you”, and you are right, I would probably have even more to say if the bear repellant actually worked. Can you even begin to imagine what kind of story I would have to tell if I had an encounter with a bear and lived to tell it? See to go hiking in Yellowstone, you are required to carry bear repellant. When I think of repellant, I think of bug spray. And you and I both know how bug repellant doesn’t seem to repel bugs one hundred percent, especially at picnics and camping. You can put out multiple citronella candles, which are “repellants” and inevitably someone is still going to get bit by a mosquito.

Bear repellant isn’t like bug repellent, in the way that it would repel bears away before you see them, but it repels them in the way that when you do see them and you release the spray at them, they supposedly turn and run away, there being the “repel” away. I would hope it works well as much as it cost to buy it. If you are planning a trip to Yellowstone, don’t worry about buying any ahead of time, you can actually rent it in the shops in the park. We didn’t know that when we bought ours ahead of time, but honestly knowing how much we like to hike, it is not a bad idea to have it on hand, just in case we get lucky enough to even see a black bear while in the woods.

When we got up this morning, we had two surprises. The first was that it had frosted overnight, the second was there was a line at the campground entrance for people waiting for camping spots. We did not realize how lucky we were to have gotten a camping spot so easily within the park on the Saturday morning that we arrived, especially being a weekend. Here it was a Monday morning and here are the campers lined up waiting. 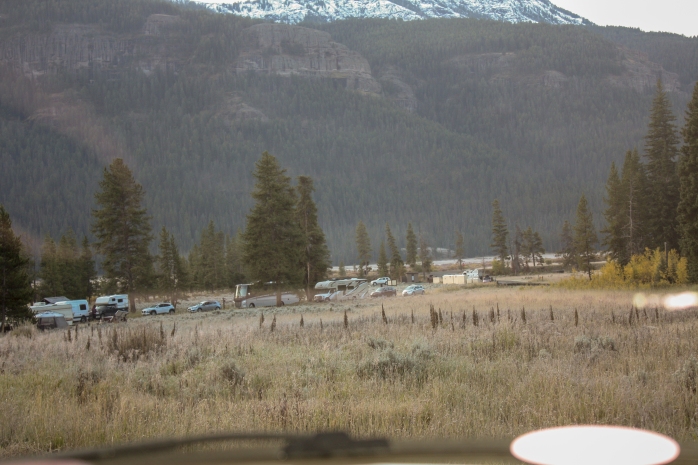 Here is a beautiful photo of a buffalo with frost on his back and head. I felt sad for him. I hope his fur keeps him warm. 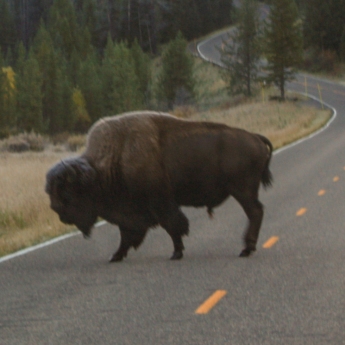 Most people take their pictures on the way in, but we were so eager to find a camping spot, and there were a lot of people taking pictures at the time, so we took ours on the way out.

As we were walking off the camera was still snapping pictures, so I had to be silly.

Once the highway is closed to snow in the early season, it typically takes a while to open back up. Because Beartooth highway has such a high elevation at 10,947 feet, it is common for it to get as much as 12 inches of snow even in August and September, of snow. It is definitely closed every winter and does not open back up to Memorial Day. Here is a link that shows the difficulty in cleaning the highway and how much snow was still on the highway in May of 2019.

On the bright side, when we came through the Chief Joseph Scenic Highway on our way to Yellowstone, it was overcast and raining so we couldn’t see as much as we would have liked to and leaving it was gorgeous so much better views. Plus, going back in the opposite direction you see things differently.

This is one of the stops along the scenic highway where we stopped to enjoy the view. I absolutely do not like heights, so this was an unusual picture for me to take. Chip said he saw me “sneaking up on it.”

The curvy road you see in the picture is the road we traveled both going to Yellowstone and leaving. This is part of the Chief Joseph Scenic Highway. 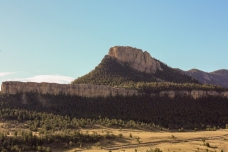 We meet this cute little fellow at the overlook. The first picture has two in it, but at one point it had five. 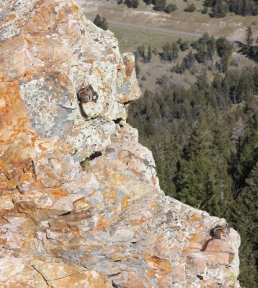 There were no buffalo on the road, but the cows now owned the road. We had to stop several times to allow them to cross. Animals out west did not seem to be in a hurry like animals in North Carolina, but then again I have never seen a buffalo on the road, and it has been a long time since I saw a cow on the road, so maybe I should not compare. 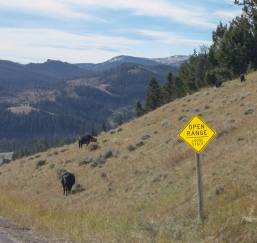 Chip humored me when I saw the sign for Montana because just a short walk away was the Wyoming sign, and since I did not get the sign going to Wyoming because we were on a backroad, I was able to get both in one stop. I know he was glad to “kill two birds with one stone.”

We enjoyed the ride, took some pictures, of course, had lunch at a rest area, and visited Little Bighorn Battlefield where we were able to see where the encounter between US Cavalry soldiers and Northern Plains Indian tribes occurred in the 1800s.

We were going to be walking through several exhibits on the battlefield, and here was the first sign we saw. I took this for my friend Wendy.

Of course, this is just a few, of the hundreds of pictures that I took at the Battlefield. 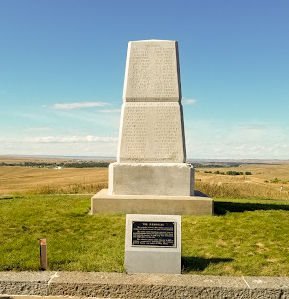 As usual, we had no definite destination that evening to stay, but while Chip drove, I was looking for boondocking opportunities. To our surprise, we found the most amazing campground in Custer Gallatin National Forest called the Red Shale Campground. Not only was it beautiful, but it was also free, yes you read it correctly, free. A free campground, not a parking lot, not an off-road trail, but a real campground with picnic tables and all. 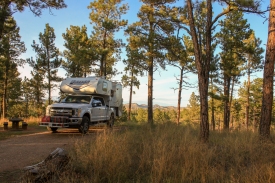 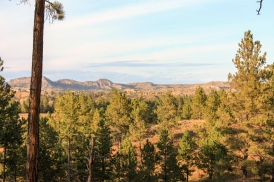 As you can see the view was amazing. I even got to have my gluten-free fish sticks, compliments of Lidl. Chip threatens to make me cook outside when I cook them at home.

It was fun to actually get the chairs out of the camper, Chip cooked outside, and we enjoyed the view before snuggling in for the night.

← MEMORIES AND ADVENTURES ARE WHAT YOU MAKE THEM
Holidays Bring Pain →