What a beautiful view to wake up to. Time to eat, pack up and go scouting for all types of animals but we had to take some typical fun pictures before we left our camping spot. We bought our t-shirts at an outlet within the Wall Drug store and thought Bailey would want one too, but she definitely wasn’t interested. She missed out on a great idea for a cute Christmas card picture. 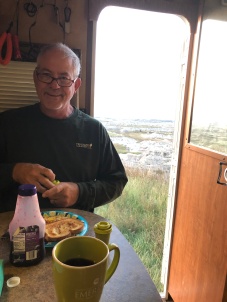 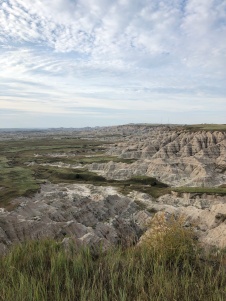 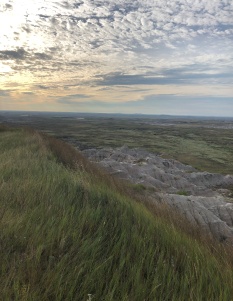 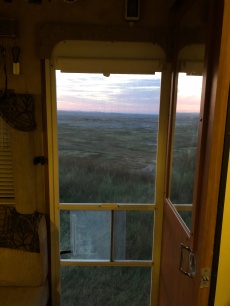 Today we went into the Badlands National Park which was literally within sight of the road into the camping area. I was excited about seeing all the animals’ Chip had told me about. He said we would see prairie dogs, bighorn sheep, antelope, mountain goats, jackalopes, rattlesnakes, buffalo, and mule deer. Chip had talked about hunting Prairie dogs while we were out there and had done the research on a license, took his gun and was prepared to hunt. Apparently, farmers don’t like prairie dogs as they tear up their farmland and there is no limit on killing them. In my mind prairie dogs must be some type of wild mangy dog if you could kill all you wanted.

As we were entering the park, people were out taking pictures of these cute little creatures that reminded me of groundhogs. Chip said, “oh look, there are the prairie dogs.” Where I asked looking around. There he said, pointing at those adorable little creatures. What? I thought a prairie dog was a dog. He started laughing. I emphatically said, “You are not hunting those; they are adorable.” And they were. I have a zillion pictures of them because they were everywhere and after a while, it seemed like they were posing for their picture. I wish I could have brought one home with me. Chip said it was against the law to catch one. If he could kill all he wanted, why couldn’t I have one as a pet? I am not sure he was telling me the truth about the law. He just didn’t want to watch me try to catch one. 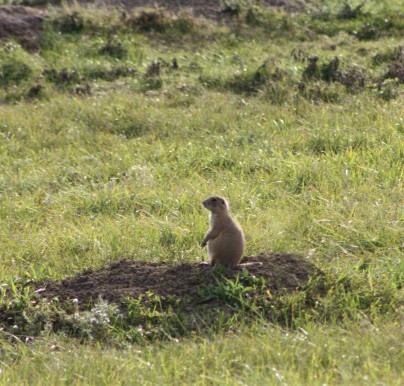 We went into the visitor center, and it was interesting to see what the Prairie Dogs burrows look like down inside as you can see in the picture. I also learned the “kissing” I caught in one of the pictures is their way of grooming each other. 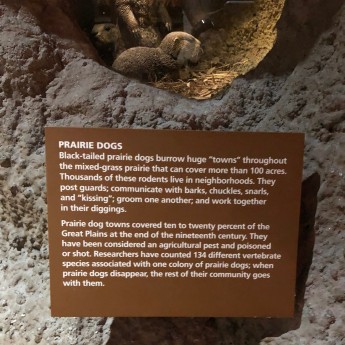 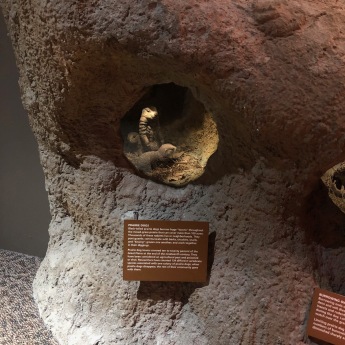 The next thing we saw was buffalo. There was one inside the gate scratching his back on a signpost. He was huge and I couldn’t believe he was so close. I was impressed that we got to see one so quickly, but I soon learned he was one of many we would see over the next few days. Buffalo out there are like deer here, they were everywhere. 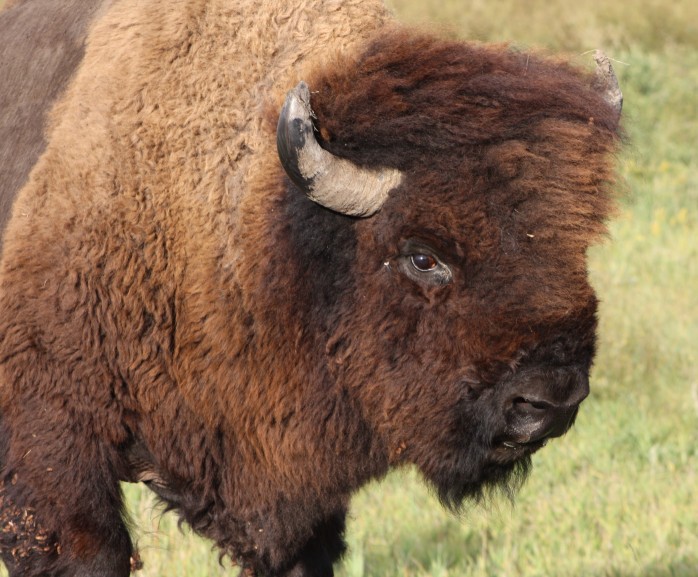 We had not gone far at all before we saw antelope aka pronghorns. It honestly took me the entire trip to remember when Chip said pronghorns that he was talking about antelope. I guess I don’t get out much because I thought antelope were in places like South Africa. I had seen National Geographic and programs like that where you would see a lion or some other large animal stalking a herd of antelope. Needless to say, I learned a lot about animals on this trip. 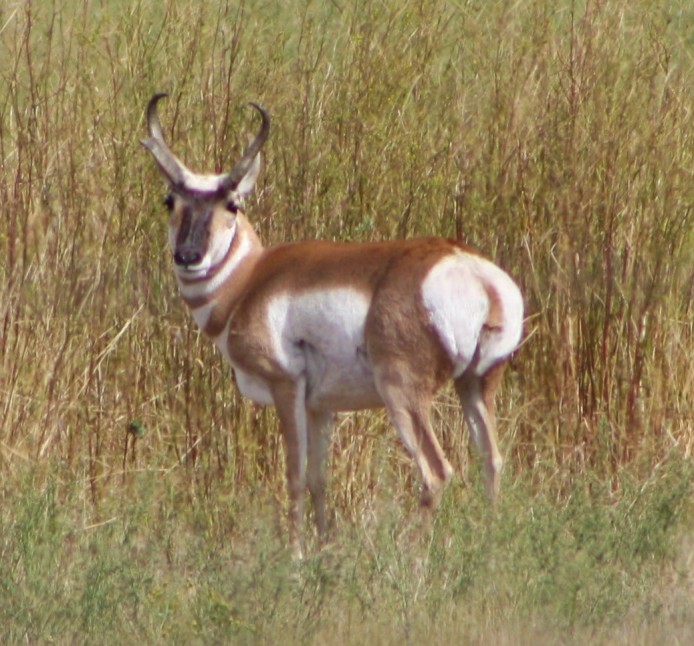 The road around the park was over 20 miles. We took our time, looking close as well as far off in the distance to see any wildlife that we could. We were constantly pulling over letting people go by as no one seemed to want to drive as slow as we were driving. What they don’t know is they missed a lot of animals by not slowing down and taking it all in.

Because we drove slowly and looked around, we were able to see some bighorn sheep laying on the rocks resting in the morning sun. You had to look down into a ravine to see them, and you couldn’t do that driving as fast as those that passed us were driving. 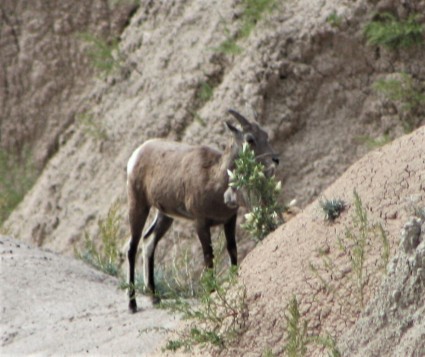 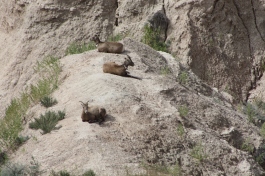 We took a short hike down into the canyon. There were a lot of rocks to climb up and around. The landscape was just so interesting. As you can see Chip is still a kid at heart and was constantly climbing up and over the rocks.

As we were leaving Chip said, “We saw everything but mountain goats.” I said no we didn’t see the jackalopes. Chip didn’t say anything but did have a smirk on his face. At first, I didn’t think anything about it. He had told me all the animals we would see, and jackalopes were one of the animals. Plus, we had taken our pictures on a replica at the Wall Drug store. Now I am not dumb, I knew jackalopes would not be as big as the ones we took our picture on, but I was looking forward to seeing one. After Chip didn’t reply when I said we didn’t see any, I decided to “google” them to get a better idea of what I was looking for and what their habitat was, so I would know where to look. There they were, just as I had seen before in pictures, rabbits with horns. There were lots of different pictures, so I knew I was looking for the right thing. But then, there it was, the word that jumped right off the page “a mythical creature” what, mythical, that means they aren’t even real. I am pretty sure my hand hurt a lot worse than his shoulder when I hit Chip as he was laughing when I realized he had been pulling my leg the entire time. I am so gullible.

We did not see any jackalope to take pictures of, of course, but this was what I thought I was looking for. Picture courtesy of google. See how real this looks, how was I supposed to know it had been altered. If you don’t believe how real they look, go to google, just look at images of Jackalope and see for yourself why I thought they were real. 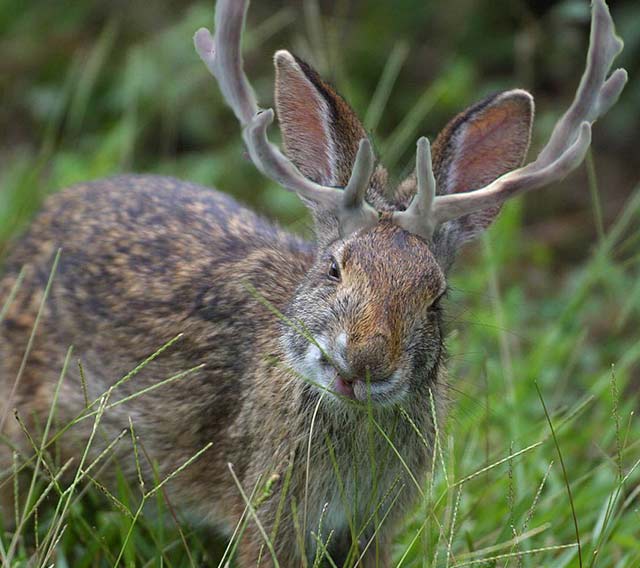 We left the Badlands National Park but was still in what is considered “Badlands” for miles and miles. We stopped at various places to get out and walk and look around. One of the places as you can see reminded me of another planet. I am sure it has been used in the movies before, it was so awesome looking. You could spend hours roaming around and they even suggested you make sure you had plenty of water with you. I guess maybe it was easy to get lost. Here are just random pictures we took of various stone creations, some bighorn ram sheep we happened to see laying by some rocks and a sign describing why the rock layers are different colors. 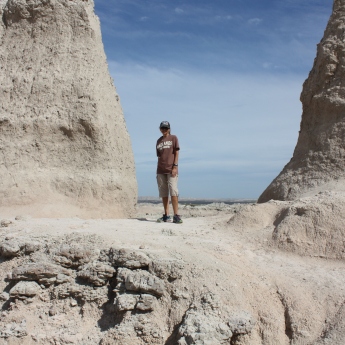 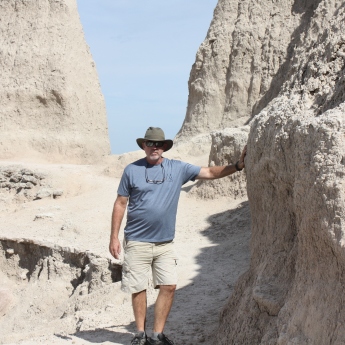 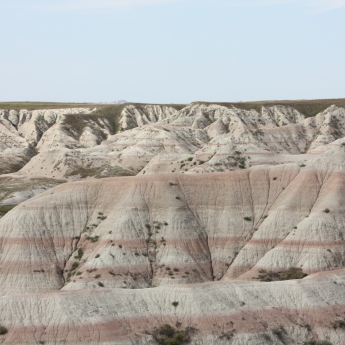 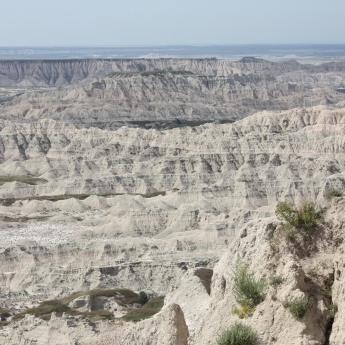 After seeing everything there was to see, it was time to leave the badlands. Our next stop was Rapid City, South Dakota. We had found a boondocking location through the https://freecampsites.net/ website and were excited to get set up before dark. The webpage said it was National Forestland and there was room for a relatively long camper. When we arrived, there was already a nice tagalong camper set up and we were afraid we might not be able to find a spot to park, but there were plenty of places since we had four-wheel drive and was relatively small. We found the perfect spot. 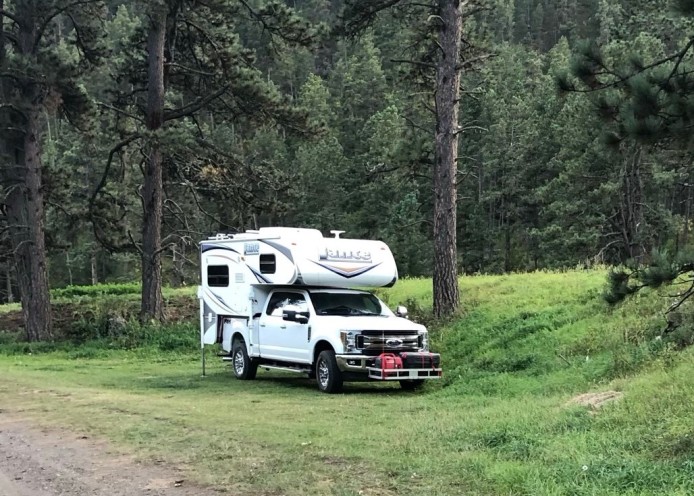 I don’t know if I had mentioned it earlier but we did not like the blinds on the bedroom windows blowing in the wind so I mentioned to Chip maybe we could tint the windows like my nephew’s truck, where you cannot see in at all. Since we were traveling and not where we could have this professionally done, my professional did it for me. We stopped by a home improvement store and purchased a roll of privacy tint prior to heading out for the night. Chip spent about 15 minutes taking down the blinds, cleaning the windows and eventually applying the roll of window tint. He had me go outside, so he could wave at me from the bed area to see if I could see him. I could not see him inside and was impressed with how well it worked. When I went back inside he said he couldn’t see me, I was like wow I didn’t know we couldn’t see out, and he laughed and said no dummy you were on the wrong side of the camper, go try it again. I still couldn’t see him, but he did see me this time, which I guess was the point, see out, not in. I love having the windows tinted as it seems brighter without having blinds up. Now in saying that when we were in a parking lot, I did prop my pillow up at the window until I was tucked under the cover. I know you cannot see in at all during the day and if the lights were out, but I never looked for myself at night and with the lights on, so until I do that, I will prop my pillow up until I am under the cover and the lights off. 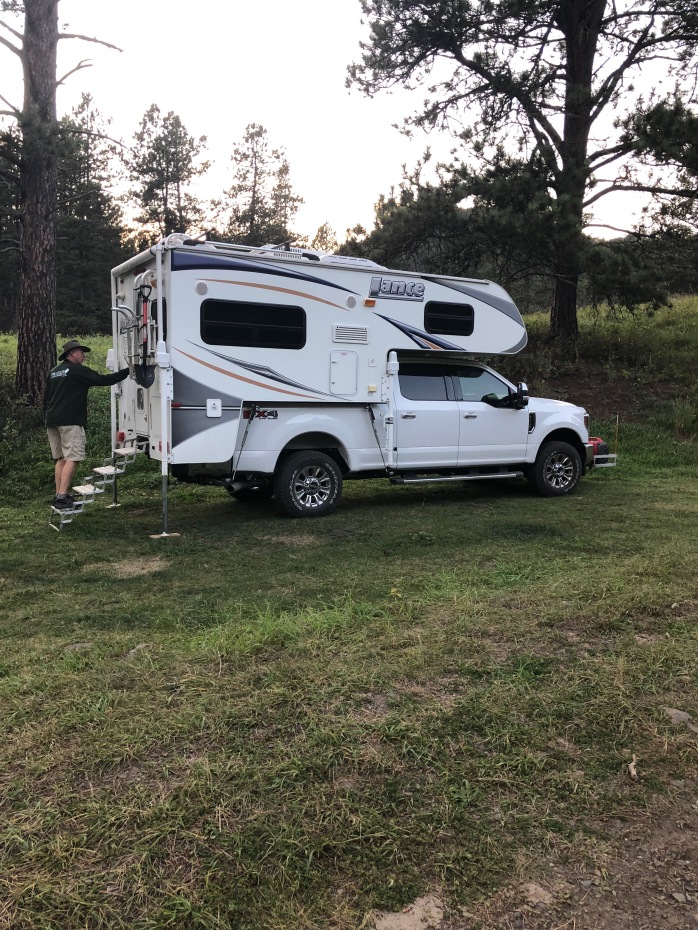 So lights off for tonight. Tomorrow we head to Mount Rushmore.