We couldn’t leave the beauty of the National Forest Land we camped on last night without taking a hike. We had a nice leisurely walk a couple of miles along an old roadbed. It was so peaceful and quiet, except for us talking. We did try to walk without talking so we could hopefully see some wildlife, but we as always had too much to talk about. I was either asking questions or Chip was quizzing me on my trees. See he is a Forestry major and ever since we started dating back in 1986, I always have lessons on trees when we walk. Sometimes I really impress him when I know a tree, but usually, he just questions the fact, “how do you not know this one you have seen it hundreds of times”. Ummm my thinker doesn’t work as well as it used to. 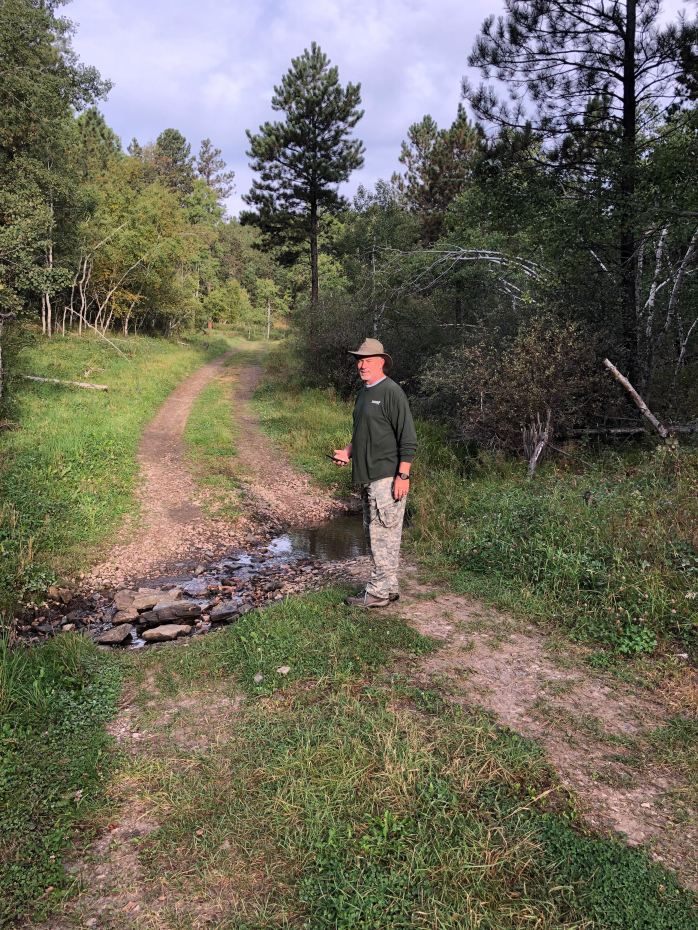 On our walk back to the truck we walked upon an older gentleman, like really older, setting up a target to do some shooting. I think we surprised him because it was early morning and we were a good distance from the campsite. I am glad we came back before he got set up as if he had missed his target, he may have been shooting toward us.

We toured around Mount Rushmore, walked the trails up to the base, and took pictures. It was really neat to see this up close as it is one of those all-American things to do. It was a lot of steps up to the base. So many steps that you made conversation with people you passed. I must have had a painful look on my face even though I didn’t think I did, as I had more than one person tell me you are almost there. I gave the same advice to those we passed on our walk back down. It wasn’t because they looked pained, just to give them encouragement so maybe I didn’t look pained either and they were just being friendly. I did have a bit of pain though as I developed a recent problem with my hip that causes me pain to pull my right leg up. So, whether I am putting on a pair of pants, or walking up steps, every movement “up” with my right leg is uncomfortable. Though it does hurt the worst part is the loss of ability. Sometimes I have to pick up my pants leg and pull the leg up, like getting in the truck or getting up on the bed. It is not in the joint, but a muscle. My orthopedic doctor described it as similar to a trigger finger. I had a cortisone injection in it before I left town, which I thought was going to work as for a few days I had no pain at all, but it didn’t last and had started hurting before we left town. I keep thinking I am going to “walk it out” like a cramp, it just hasn’t happened yet. Going back down the steps doesn’t hurt the muscle at all but does hit a grind here and there with the knee. But I can assure you the view was definitely worth every step and I would do it again in a heartbeat. 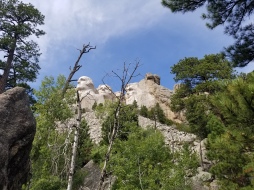 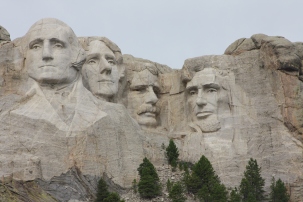 We saw our second Earth Roamer camper in the parking lot. I bet when they parked beside us, they were like, “look how cute that little camper is, remember when we had one like that”. That will be me when I win the lottery. I will be that Earth Roamer, but I will never forget what it was like to have a truck camper. My truck camper is my memory maker. 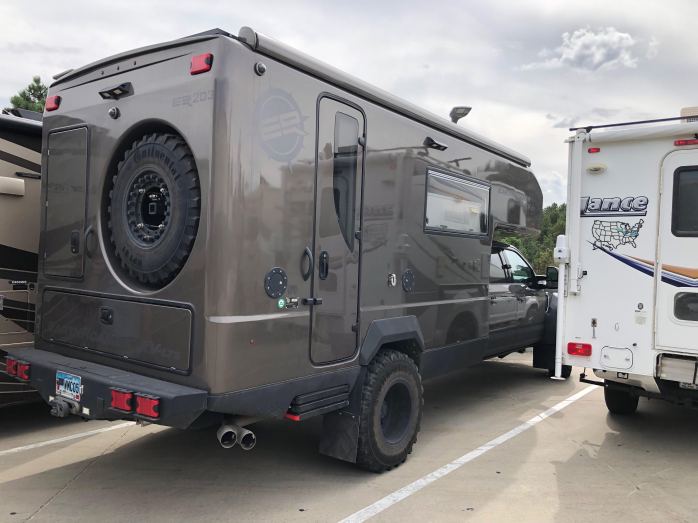 Our next stop was the town of Custer. We had to stop and get milk. Chip loves his milk. We were surprised to see the grocery store sold Liquor. You definitely would not see this in North Carolina, so we had to take a picture. They had a wonderful gluten-free section which surprised me as it seemed to be a small local kind of grocery store.

In the parking lot, we saw a cool “old fashioned” truck camper. I would have loved to have met the owners and looked around the inside. I thought it was awesome looking, but Chip wasn’t nearly as impressed as I was. He said he would keep the one he had.

Tonight, we had to pay for camping. I had set a budget for 100.00 for camping fees for the entire trip and I was not happy to have to pay out, but we didn’t have a choice as tomorrow’s adventure would not allow for a truck camper. I will let you know at the end of this journey if I was able to stay within my budget.

We stayed at Center Lake Campground. We knew we wanted to stay in an actual campground tonight because tomorrow we plan to travel a road that has tunnels that are too small to accommodate a truck camper, so we will be leaving it behind. Our camping fee was 19.00 a night and we planned to stay 2 nights. It was a beautiful yet rustic campground with no service such as electricity or water. It was still boondocking, just in an actual campground. 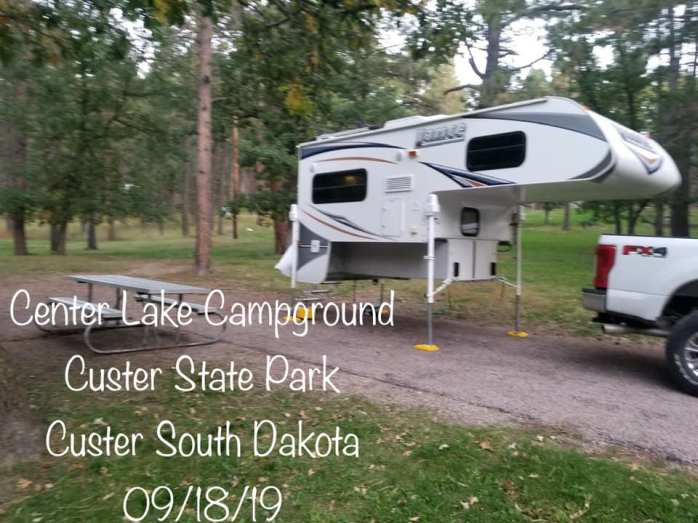 While Chip set up camp, I had to walk to the telephone that was across the road and literally was an old-fashioned type of phone on a pole. I was leaning against the telephone pole talking to the man who was taking our reservation and when I say leaning, I mean leaning. I looked like I must have had a long day. I felt like I was Fonzi back in the 1950’s talking to his girl. Two park service men rode by and were laughing. Not sure if it was at me or a story they were telling, but I felt self-conscious and stood up more ladylike. By the way, the campground was so remote there was no cell service and that was why they provided a landline telephone to use.

It was early afternoon, so we decided to go ahead and ride on the wildlife loop road in Custer State Park. Custer State Park has over 71,000 acres of land and sits in the Black Hill region of South Dakota. The Wildlife loop road is 18-miles long and animals that you might see included bison aka buffalo, white-tailed deer, mule deer, pronghorns aka antelope, mountain goats, coyotes, elk, bighorn sheep and of course more prairie dogs.

We were fortunate to see a lot of buffalo, antelope, and some deer. It was just fun riding around seeing the beauty of the land while anticipating what you may see next. 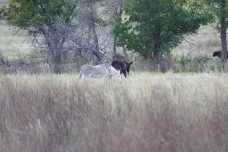 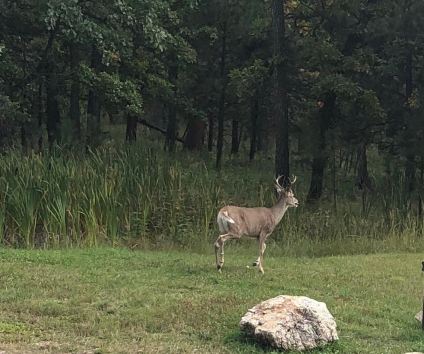 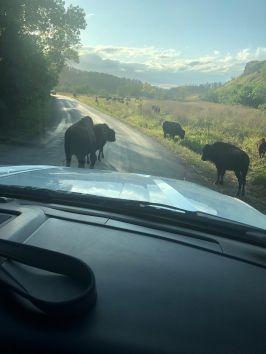 Chip had to stop and make some work calls and this adorable chipmunk caught my eye. Chipmunks were everywhere on this trip. There were at least five playing together right where we were parked, but they wouldn’t cooperate and all get in my picture at one time.

It was getting dark and we decided to splurge for dinner. The only option was a beautiful lodge, the Blue Bell Lodge. I was hesitant to go in as we were “camping” which means ballcaps. I was not about to take my hat off as I would have gotten a lot more looks without it then I would with it. We decided we didn’t know anyone there, would never see anyone there again, so why did it matter. Though beautiful, yet rustic, it wasn’t fancy on the inside. There was at least one more lady with a ballcap on, so I felt better. We both had buffalo to eat. I typically do not eat red meat, and that will be in another blog, but I splurged tonight, because how often would I get to have buffalo meatloaf. It was not what we call meatloaf in North Carolina as it was just ground meat with mushroom gravy, it had no tomato sauce, peppers, and onions and things like that we put in our meatloaf. But it was delicious. Chip had buffalo tips with gravy as well. We thought we would have some to eat for leftovers the next day, as our plates were very full of potatoes, cowboy beans, and steamed vegetables, but we didn’t. We cleaned our plates like two cowboys who had been working on the range all day.

Picture courtesy of their webpage. I was going to take a picture, but I would have had to take the picture of other people and they would have wondered why this woman was taking their picture. 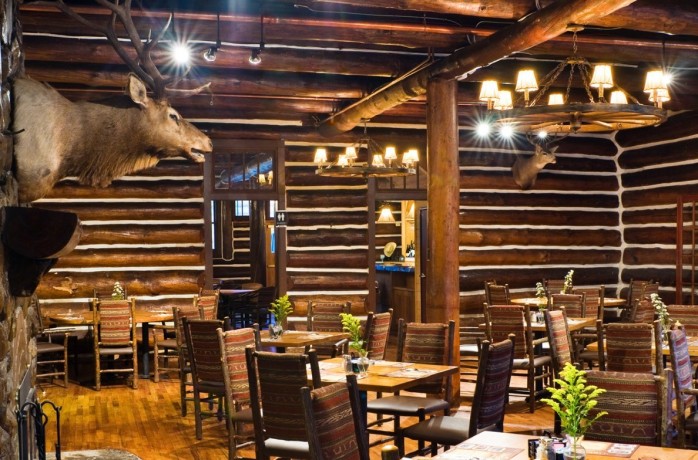 Needless to say, with bellies full and a full day of riding, we were tired and called it a night. Join us on our ride tomorrow through Needles Highway.